I’ve long thought social media plans overrated. Nobody opened a Twitter account thinking, “Hey! This is a great way for me to receive meticulously-voiced messaging from brands!” A good social manager keeps a finger on the pulse of relevant conversations and finds out how to add to the conversation in a meaningful way.

In a poetic justice kind of way, UMBC’s history-making win on Friday night was payback for the school’s previous postseason spotlight moment: the 2014 College Cup. Until the upset of Virginia, UMBC has made its loudest noise in men’s soccer. Under 27-year head coach Pete Caringi, UMBC has won 283 soccer matches and advanced to the national semifinal in 2014. There, it lost 1-0 to…Virginia.

I knew about UMBC soccer, and thought about it the day after I watched the men’s basketball team (and Twitter account) make history. Let’s look at @UMBCathletics and its voice during its biggest moments and see why it worked for them.

From going strong at Seth Davis to dunking on randoms about their beards, Zach Seidel moved the needle almost as much as the team did. And that’s the key: Zach found a perfect storm and made it rain.

Let’s look at the UMBC Twitter voice during the 3 largest moments in its history:

After going 16-1-3 during the 2013 season, UMBC soccer rolled all the way to the College Cup in 2014. Wake Forest, “University of Maryland, College Park,” Louisville and Creighton all lost to the small school just off I-695 in Baltimore. Let’s look at what @UMBCathletics said about it:

Pretty standard. The 12/9/14 tweet sharing the Washington Post article, while executed poorly visually, had some sass on it and did 9 RTs and 14 likes. Below is a series of tweets UMBC ran with leading up to the College Cup, a goalkeeper campaign that started strong then had mixed results. 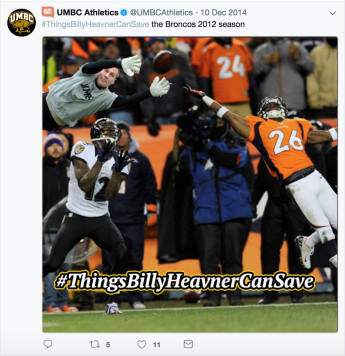 UMBC last made the tournament in 2008, when Twitter was in its infancy. So winning its league tournament 2 weeks ago on an epic shot against the league favorite was its big profile moment until beating UVa. You’ll see below that almost 4 years later the current voice is what we all now know. 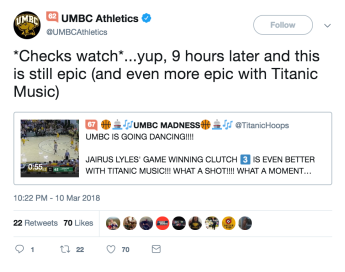 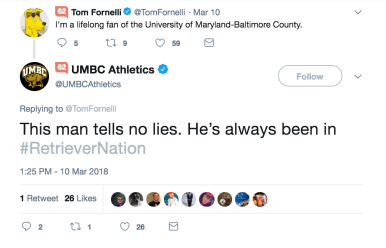 Zach’s pretty funny. And what’s clear is UMBC has an engaged audience and they support the heck out of their teams. Note in the first tweet (March 10) he noticed his audience grew and gave his school a branding PSA to its newbies.

We’ve already seen all of this. It speaks for itself. 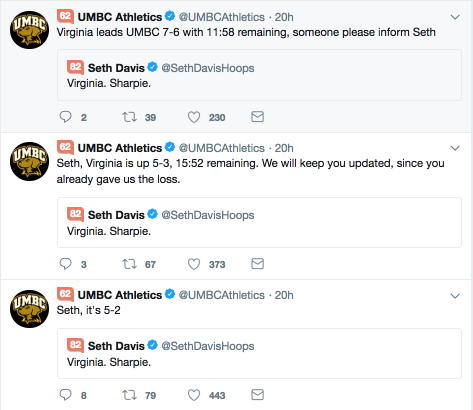 And it goes on and on. The media storm UMBC’s complete operation deserved followed:

Friday’s outburst is more or less on point with what he’s done. Of course, it was on a once-in-a-lifetime stage. Now that we’ve seen the data, here are a few takeaways:

The bottom line is, if UVa had woken up after halftime this would’ve been a blip. Zach still would be funny and would still be doing a good service for UMBC and its audiences. Win or lose, the game results and news drive digital. Period. And Zach kept that idea on the backburner, while still going strong to the rim.

Regardless,  Zach Seidel or UMBC didn’t see what was coming in the near future when this tweet went live: