When I worked down in North Carolina, I lived down the street from what I think is the 3rd best brewery in Raleigh, the appropriately-named Raleigh Brewing Company. Great place, family and dog friendly, 300 yards from my house.

I had a vision for my employer: a branded beer with a nearby and popular partner, providing tremendous reach and engagement with students, alumni and the nearby community. I didn’t pitch it too hard, as no department in that area sold beer at athletics events (this was often discussed in the Triangle media) even though the burgeoning beer tourism scene guaranteed success. Now, a handful of universities have proven that branded craft beer – and other consumables – can be a boon on many levels.

Executed thoughtfully, 8 Football Bowl Subdivision schools as of the 2017-18 academic year were cashing in on beers with their marks on them. But that doesn’t mean all parties aren’t tying all the loose ends together to make sure the new products are sold and consumed responsibly.

You can find this story on Front Office Sports HERE.

Some schools have tied an academic component to the branded suds, and all have enjoyed newfound success with a new and exciting offering.

For administrators, beer is a lot easier to swallow if there’s an academic component tied to it. That’s what the University of Louisiana at Lafayette has done, and the Ragin’ Cajuns are now known as the first university to raise a university-licensed, year-round glass to an official craft beer partnership.

Louisiana was the first to the craft beer game because it was one of the first schools to sell beer at football games in 2009. By the football home opener vs. Northwestern State in 2015, Ragin’ Cajun Ale was launched and on tap in-stadium as well as at a handful of bars and restaurants. In 2016, brewing partner – led by loyal alumni – Bayou Teche Brewing launched another offering, Ragin’ Cajun Lager. These two products are now available all throughout Louisiana and in a few places in Texas.

Aaron Martin, Chief Communications Officer at Louisiana, said the school was able to control the product all the way down to the label. Where the Cajuns have been different in this space is they don’t use an athletics logo on the beer packaging. They believed their unique name was all the recognition they needed.

“Usually you’re handing your logo over to a manufacturer and that’s it. You’re licensing artwork,” Martin said. “But this was a different process of branding for us.”

Once Louisiana went all in, Martin said the school enjoyed a drop in alcohol-relate incidents at athletics events. In fact, as part of the sponsorship agreement with the beer distributor, A-B InBev agreed to send a speaker to campus to talk about responsible consumption.

“I haven’t had a single complaint,” he said.

Bayou Teche Brewing is now the top licensing vendor for Louisiana. And while consumables average between 1-4% of university royalty revenues nationally, the Cajuns see 30% of their licensing money coming from eat and drink. The extra bump from craft beer sales as helped all university entities, including improvements to the Cajundome, university marketing spend and support for university research and recruitment programs.

It’s not just beer on the bayou. Louisiana has made a big splash with a variety of branded consumables: coffee, wine, Cajun seasoning and a university-branded burger partnership with Sonic.

“We didn’t just throw our name on a beer. Bayou Teche went out of their way to make a quality beer people will enjoy,” Martin said. “Cuisine is very important to our region and our fan base.”

Purdue University’s collaboration with People’s Brewing, the 5.0% ABV Boiler Gold, takes commitment to academics to a higher level. The launch of the light and easy drinking golden ale in 2017 coincided with a resurgence in football, but the beer is strictly centered around the school’s proud agriculture program.

Chris Johnson is the head brewer and co-owner of People’s, located a few miles from campus and off the same interstate exit as Ross-Ade Stadium. An alum with a long-standing relationship with Purdue’s Department of Food Science, Johnson was helping the university establish a tap room on campus when he joked, “Wouldn’t it be cool if Purdue had a beer?”

A joke became a year of meetings and proposals, but the beer run kept hitting the same obstacle: university policy at Purdue prohibited school marks on alcohol-related products. Johnson says the school wasn’t necessarily against the idea of Boiler Gold, but policy didn’t allow it. That had to be re-written.

After nearly a year of meetings and fact-finding, the conversation changed.

“It now became, ‘How can we have the policy to do what it’s supposed to do, but also allow for a project like this to happen?’” Johnson said. 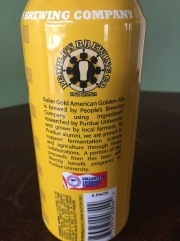 Soon, Purdue wrote some specific policy language allowing for Boiler Gold, but having it controlled and offering it responsibly and in concert with the mission of education.

It also didn’t hurt that Purdue president (and former Indiana governor) Mitch Daniels was on board. Johnson says Daniels’s administration became convinced a responsibly-executed craft beer project affiliated with the university could be beneficial. But, if Purdue was going to be in this game, Daniels wanted it done right. In fact, one of the first 6-packs off the line went right to the president’s office.

With help from the proceeds of Boiler Gold, Purdue will be launching a fermentation science program in the fall of 2018. Food sciences is the main beneficiary of the beer’s sales, which became the entire focus of the project.

“The hard part is intent,” Johnson said. “If you intend to just make money for athletics, that’s a hot-button item. The intent for this product was educationally-based, so that was huge part of it.”

Craft breweries, wineries and distilleries are booming. Purdue and People’s saw this as a way to drive people toward a still-growing agronomy, and a fun way to put relevant local business into action.

Here’s how the business side of beer works at Purdue: People’s sells Boiler Gold to Levy Restaurant Group, and both parties pay a royalty to Learfield. The fee People’s pays to Learfield is earmarked for agriculture academics. The concessions royalty Levy pays to Learfield goes to athletics and the school’s general athletics fund.

Johnson first poured Boiler Gold at a tailgate event in downtown Indianapolis before Purdue’s 2017 opener vs. Louisville at Lucas Oil Stadium. The beer was then available at home football games and the 1869 Tap Room in the student union. In 2017-18, Boiler Gold was sold at all football home games as well as men’s and women’s basketball, baseball and volleyball.

The beer was the #2 seller at Purdue’s home football games and today is the best-selling beer at People’s Brewing since its launch in fall 2017.

For People’s, the collaboration with the university has been beneficial from a sales and marketing standpoint. But Johnson also values the partnership’s role in education, agronomy and supporting local farmers and students.

“It’s not only a funding mechanism and a marketing vehicle for the food sciences program, it’s something Purdue fans can be proud of.”

While Tulane University has long sold beer and spirits at athletics events, some passionate alumni and a logo rebirth are what brought Green Wave Beer to fruition.

NOLA brewing, located south of the French Quarter just a bottle’s throw from the Mississippi River, has long been considered a leader in New Orleans’s craft scene. Some Tulane alumni working at NOLA saw the success of the Ragin’ Cajun beers and brought the idea to the university. However, for 8 months the deal stalled, mainly over the use of marks and logos.

NOLA proposed using the school’s old logo for the beer’s branding. But in the summer of 2016, the school’s Angry Wave logo from the 1960’s was brought back as a secondary approved logo. So now the old logo is the new logo – and NOLA slapped it on the beer can.

Green Wave Beer is a krystalweizen, a light gold beer meant for warm weather drinking. At 5.4% ABV with hints of banana and clove, Green Wave Beer is like Boiler Gold in that it’s sessionable and pairs well with tailgating.

Nathan Hubbell, GM of Tulane’s IMG sports marketing, says 12% of the beer’s sales go back to Tulane. The beer was launched Labor Day weekend in 2017 as Tulane kicked off its football season against Grambling, starting out at tastings for donors and corporate sponsors before going wholesale. Hubbell, who has a background in the NBA and NFL before coming to Tulane, says the beer sold $50,000 in the first quarter before having much distribution at all.

In 2017-18, Green Wave Beer was available at all home athletics events and, Hubbell says, “we’re now seeing how many locations we can get to carry it.”

A Different Type Of Academic Collaboration

Like Tulane, New Mexico State became interested in a branded beer after learning of Louisiana’s success. As IMG approached the Aggie AD Mario Moccia about a new revenue source, consumables, the wheels in Moccia’s head began to turn about branded Aggie beer.

Moccia wasted no time before calling Tulane AD Troy Dannen about the pros and cons of Green Wave Beer. Dannen gave a glowing review, and after he called his legal department, Moccia went to work. But he ran into a unique roadblock: Colorado State University had already launched its Old Aggie Lager with craft powerhouse brewery New Belgium. The Aggie moniker already had a seat at the bar. 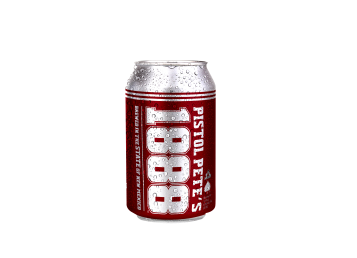 Moccia reached out to a marketing class on campus and asked them to work on naming and branding. Between this academic collaboration and the work of graphic designer Randle Dominguez, Pistol Pete’s 1888 Ale, a blonde ale clocking in at a sessionable 4.8% ABV, was born in the summer of 2017.

NMSU’s athletics department didn’t have the relationship with Bosque Brewing that Purdue had with People’s, but Bosque was led by Aggie alumni and had a location about 5 minutes from the school’s Aggie Memorial Stadium.

According to Moccia, it only took “one or two emails to the chancellor” before the project was greenlit and soon New Mexico State held a launch party at Bosque to announce the 1888 beer. The launch garnered interest from local television and the AP ran the school’s launch party announcement. By the start of the 2017-18 year, the new beer was available at home football, men’s and women’s basketball and volleyball events.

“It was a phenomenal success,” Moccia said. “A wonderful collaboration.”

While the first royalty check to NMSU was for just $2,500, that sum came from a mere handful of restaurants. Other revenue came from concessions, and Pistol Pete’s 1888 will be canned for this coming year and be available in 1,000 points of sale across New Mexico. That’s when the real money will come.

“This is the wave of the future. This has been great for branding and great from a financial standpoint,” Moccia said. “Everyone is looking for a revenue source and this is a great advertising tool for our institution.”

Other schools have dipped into the branded beer game, including LSU, New Mexico and Montana. Purdue expanded its alcohol sales in 2017 while most of the others in this space had already sold alcohol at home athletics events. Moccia said alcohol-related incidents were down significantly at NMSU football games in 2017, and Johnson suspects Purdue has enjoyed similar success by going away from pass-outs during football games.

From financial, brand marketing and alumni relations standpoints, it’s hard to argue against collegiate branded beers being anything but a success. So bottoms up, here’s to the bottom line. The increased buzz is certain to be a net positive for athletics, academics and local breweries alike.

AD Action Items:
5 Tips to make a branded craft beer a reality on your campus.