Every day during the baseball season, I bellyache that the Chicago Cubs don’t score enough. Even in the 2016 season, they were exposed by elite pitching and I never felt comfortable about where offense would come from. While that 2016 team was an outlier because of its all-around excellence, 2 years later I still am uncomfortable with the Cubs’ offense.

“But Josh, they were second in the National League in runs last year and are again this year! In fact, the 2017 Cubs scored 14 more runs than the World Series team!”

A lot of people defend the Cub hitters with that idea: they score ‘x’ amount of runs, they average ‘x’ amount of runs and those numbers are among the best in baseball. And cumulatively, yes, the way modern baseball analytics work is the math tells executives to build the team that produces the best 162-game totals possible. At the end of the year, water finds its level and you are what you are.

But I don’t think offense should be evaluated by cumulative runs scored or runs per game. How I consume the Cubs is daily. I want 6 runs every day, not 18 runs during a weekend that includes 2 duds and 1 outburst. What people aren’t looking at is:

“How often (how many games) are the Cubs satisfactory on offense?”

How Often Do The Good Teams Hit?

I took a handful of National League contenders and teams that were expected to contend and took a look at how often they produce at the plate. I broke the segments down into:

This is where you see the feast or famine element with the Cubs:

As of May 17, yes you’ll see the Cubs are ranked 2nd in the NL in runs per game. They score a lot of runs – the offense is fine! But look at how often they score 4-7 runs. The Cubs have score between 4 and 7 runs just 6 times. 6! The division-leading Brewers have done that 19 times and won 15 of those games.

You’ll also notice the famine – the 21 games when the Cubs scored 3 or fewer runs (7-14 record). I was a little surprised that some of the other contenders had similar famine totals. Note the amount of dud games the Rockies and Diamondbacks have had.

Next, notice the feast. The Cubs feast better than anyone else in the National League, scoring 8 runs or more in 13 games (winning all of them). The Brewers and Cardinals rarely feast, having only 6 games with an outburst of 8+ runs. But those teams are more consistently functional.

What Happens After A Feast?

The 13 feasts the Cubs enjoyed are just that, 13 games. They don’t carry over to the next day. For the last couple years, I’ve felt like the Cubs could get 14 runs one day and 1 the next. Average for those 2 days: 7.5 runs. Successful hitting! But really, you’ve had one outburst that counted for 1 game and 1 dud worth just as much.

I went ahead and looked at these same NL contenders and how they fare the day after a feast:

The Cubs looked better than I thought here. First, because it’s a tiny sample size and numbers are easily skewed. For example, the 4.9 runs after a feast number includes games of 16 runs (April 20) and 10 runs (April 24). One thing to take away from this chart is how the Rockies, Brewers and Nationals keep the pedal down the day after a feast. No letdown.

How’d They Do Last Year?

The 2018 Cubs season is shaping up similarly to last season. Feast and famine, largely uneven, but they have the best roster in the NL Central and should win it. But I didn’t think they hit well last year, despite scoring 822 runs.

Next let’s look at the same numbers from above for some NL contenders after the 2017 All-Star break, using that period of time because it’s widely believed that by then you are what you are. That’s when the Cubs took off, the Brewers faded and all of the numbers ended up making sense.

Here’s how the best teams in the National League fared last year after the All-Star break: 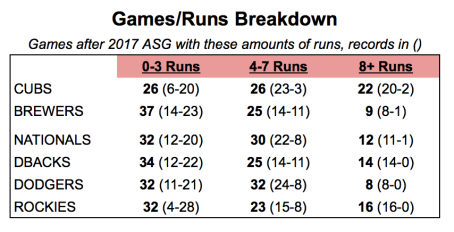 The summer of 2017 was glorious when the Cubs scored 4+ runs: a 43-5 record. And the Cubs feasted down the stretch more than anyone. But still, the Cubs had famine just as often as they were functional, and more often than offensive outbursts. And this came during their best stretch of the season!

How The Cubs Start Every Spring

What’s true is that the numbers do come around and the teams that are supposed to win eventually do. But let’s use the feast/famine exercise to take a look at the runs breakdown for the Cubs during the last 3 springs:

The 2018 Cubs have more famine games, and the 2016 Cubs had the elite pitching where scoring 4 runs made them unbeatable. This current Cubs team actually feasts more than the 2016 Cubs, which seems like it’ll eventually pay off as Anthony Rizzo comes around some of the power reappears.

But what this analysis shows is the need for offensive consistency. Scoring 8+ runs sometimes is really fun, but doing that a league-best third of the time (as is the case now) only gets you a favorable outcome a third of the time. There need to be more 5- and 6-run outputs, merely functional.

By having less famine and more functionality, the 2018 Cubs can cruise to another division title and not be exposed by elite pitching in the playoffs.