I tried to do this kind of thing on my own in years past, but it was always too hard to find time to cover the tournament with your team and evaluate the bracketologists. The year-round bracketology fever the public has is interesting to me on many levels:

There are a few notable bracketologists in media I have followed that work for major publications: Joe Lunardi (ESPN), Shelby Mast/BracketWAG (USA Today), Patrick Stevens (Washington Post) and Jerry Palm (CBS). These are the four I will evaluate.

In the past, I’ve thought Stevens was the best at getting the at-larges. He puts the most into it – you’ll see him everywhere in the mid-Atlantic region. He really works at seeing teams and following storylines in the sport. Lunardi is obviously the don of this sort of thing, and I’ve usually thought he’s the best at seeding.

After I got back from the park with my daughter on Sunday, I saw Davidson beat Rhode Island. During the 4 o’clock hour, I gave all 4 predictors a minute to put Davidson in there and then I pulled all of their final brackets, while only the AAC final was left to be played.

There was a lot of criticism for the committee this year, maybe more than the last few years. Whether you agree with the committee or not, that’s for another time. Let’s see how the four bracketologists did: 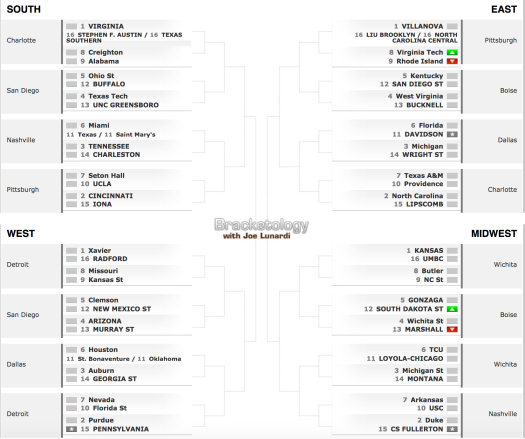 Lunardi, the most well-known of the bracketology faculty, scored the most points in the evaluation. He picked 34 at-large teams correctly, and led the field by correctly seeding 45 teams. I docked Lunardi 3 points for being 2 seed lines off on Stephen F. Austin, Butler and Rhode Island.

Palm picked Syracuse to be in the First Four, so he led all bracketologists with 35 correct at-larges. He seeded 41 teams correctly, but was docked 3 points for missing by 2 lines on Providence, UMBC and UCLA. Palm placed 23 teams in the right region but was last by only sending 18 teams to the right locations. 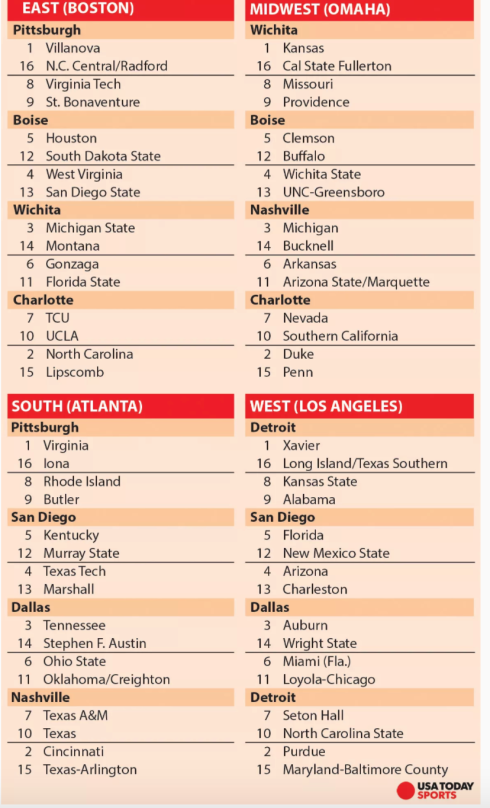 Mast placed fourth in my evaluation, correctly projecting 34 at-larges and correctly seeding 39 teams. He was a little wild with seeding at times, losing 6 points. He was off 2 seed lines on San Diego State, Florida State, St. Bonaventure and Gonzaga. I docked 2 points for not having Creighton (an 8 seed!) in his bracket. Mast put 20 teams in the right region and 24 in the right location.

I can’t really screenshot Patrick Stevens’s bracket, but here’s a link to it on Washington Post.

Something interesting to note about Stevens’s picks is that he had Va Tech and Bama pretty much correct, except that the 8/9 seeds were flipped. Had he flipped the Hokies and Tide and been nicer to Nevada, he would’ve had 121 points. Stevens led all bracketologists in 2 areas: by placing 24 teams in the right region and perfectly predicting 13 teams. He also placed 24 in the right location.

What Does This Mean?

The Bracket Matrix site does a nice job aggregating all of this. I just wanted dive deep into 4 projection makers that I follow closely. All 4 are well-respected and move the needle all season long with their brackets and commentary.

It seems as the majority of bracketologists can get 66 teams right at least, meaning “so-and-so has us in” is probably meaningful. Seeding and geographic placement is a little tougher, and is what separates people a bit. The reason I put so much emphasis on placement is because of how college athletics folks consume bracketology. “Lunardi has us as a blank going to blank.” That’s why it matters.

Enjoy the tournament, and thanks for reading. I’ll have some thought about athletics communications in the tournament and I’ll share my bracket (it’s permissible for me to play now!) later this week.